The best churches in Milan, Italy

By Alessia Baldassarre IN Discover the town at 20 June 2017

You are planning to visit Milan in a different way than usual. With calm and comfort. On board a luxury car with private driver you have decided to hire for the occasion, sipping on a cool glass of champagne, while getting to your sights of interest.

Are you also planning to discover, during your journey, the best churches in Milan ? Perfect, you are in the right place. In this article I want to list the most famous churches in Milan, you can not ignore.

What to see in Milan

The goal of this trip? To discover the more authentic side of this metropolis. Yes, you want to go beyond the fashion side of this town. It is very easy because every corner hides some surprises: scented gardens, courtyards and houses with handmade railings nestle behind the tall buildings. Small masterpieces created by master craftsmen who are still going about their business with devotion.

And then, there are the monuments, especially the churches. Milan holds a wide variety of churches of great splendor and style bearing the signature of great artists. These buildings come from different ages and are bound to powerful people who changed the Italian history. You guessed it, right? I want to take you to discover the most beautiful churches in Milan. Let’s go!

Milan Cathedral, the most famous church in Milan

Among the churches to visit in Milan, the most important is the Cathedral, which is the third religious building in the world after St. Peter’s in Rome and the Cathedral of Seville. In Gothic style, is the symbol of the city and it perfectly embodies its essence.

It rises skyward with its white marble façade and is surmounted by the famous Golden Madonna. With its 108 metres stands on the square as a silent spectator of events that changed the destiny of our beautiful country. And it is guardian of treasures that still speak to the heart of men and enchant with their beauty.

The history of Duomo in Milan

What is the history of Milan Cathedral? The church stands on a sacred territory which once housed the Temple of Minerva and later the Church of Santa Maria Maggiore. The Cathedral was built in 1386 on the order of the first Duke Gian Galeazzo Visconti, Lord of Milan. He wanted the Cathedral to be covered with white marble from the Candoglia quarries owned by his family, and so it was.

The façade was created by Pellegrino Tibaldi and dates back to 1580. Anyway the structure elaboration was very slow: it took about six centuries to complete the work. The construction works were entrusted to famous architects, as Leonardo da Vinci and Donato Bramante. To leave you breathless, there are the massive spires, pinnacles and statues which are about 3400. To this magnificence can be added the high relief bronze portals. Here you will be able to read Milan history, Emperor Constantine’ s Edict and St. Ambrogio’s life.

What to see in Milan Cathedral

Yes, you got it right. What to see in Milan Cathedral? The plan is a Latin cross and has five naves. To grab your attention will be surely  the stained glasses. They date back to the 15th century and were created by important artists, as Christopher de Mottis, Stefano da Pandino, Niccolò da Varallo, Giuseppe Arcimboldo, Pellegrino Tibaldi and Giovanni Battista Bertini.

These light windows tell the main episodes of the Bible and have been for a long time a source of knowledge for the poor people who could not read the Scriptures. The image of catholic Last Judgment will surprise you and stimulate your thoughts on religion and faith.

Then, there are other masterpieces to discover in Milan Cathedral. For example, the tomb of Gian Giacomo Medici, brother of Pope Pius IV. This work is signed by the famous artist Leone Leoni. And don’t miss the tree candelabra in the left transept. The precious object has seven arms and is 12 metres tall, was carved from the French Goldsmith Nicholas of Verdun and was donated to the Cathedral in 1562 by the archpriest G.B. Trivulzio.

Moreover, in the archaeological areas, there are the remains of early Christian baptisteries of San Giovanni alle Fonti, Santo Stefano and the basilica of Santa Tecla.

Yet another gem is in the southern arm of the transept, where you can see the statue of Saint Bartolomeo martyr who carries on his shoulders his own skin. You can complete your visit by climbing on the terraces of the Duomo of Milan: from here, you can see the whole town and you’ll feel like touching the sky. For all information, opening hours and entrance fees see the official website of the monument.

Among the most famous churches to visit in Milan there is the Church of Santa Maria presso San Satiro embraced by Torino and Speronari Streets. This building is fascinating because it embodies the artistic influences and historical sights of the town.

His oldest part was founded in the 9th century by Archbishop Ansperto around the shrine dedicated to Saint Satyrus, brother of Saint Ambrose, patron saint of the town. In this place, that kept a painting of the Madonna and Child, the famous miracle of San Satiro happened. 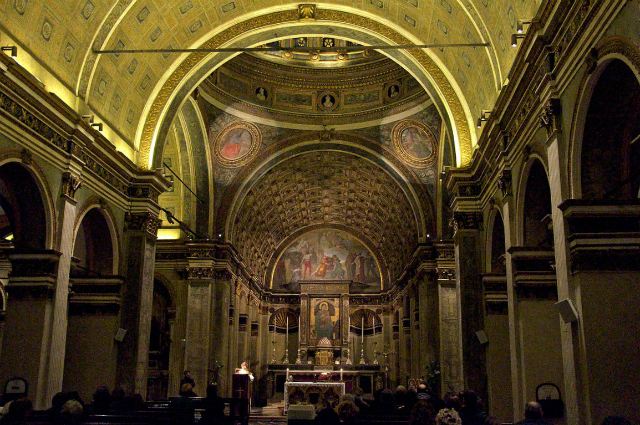 We are in 1242. The protagonist of the story is Massazio di Vigolzone, a gambler who had lost a lot of money to the game. The case, or rather the fate, wanted the man in anger to stop next to the sacred image and to strab it. Suddenly the painting began to get out blood and everyone in town cried to the miracle. If this story has intrigued you enough, you can even admire the dagger. The weapon is still kept in the small Cathedral.

The architecture and the style

The real construction of the church began in the late 15th century on the order of Duke Gian Galeazzo Sforza and later continued by Ludovico il Moro. The Renaissance style makes this one of the most beautiful churches of Milan. Actually, its design was entrusted to Donato Bramante who managed to obtain from limited space a church full of blue and gold decorations with classical motifs and niches crowned with shells.

These details are visible on the façade created in 1872 by architect Giuseppe Vandoni. The Church of Santa Maria presso San Satiro is characterized by a T-shaped cross and three naves, the central one is covered by a barrel vault and a dome.

The gems of the church of Santa Maria presso San Satiro

What you don’t have to miss out in this famous monument which is one of the most beautiful churches in Milan? The fake choir expertly designed by Bramante because the structure did not have enough space to host a real one. Let yourself be enchanted by the image of a monumental apse surmounted by barrel vaults with ceiling coffers. It is a game of great beauty.

In the connected chapel of St Satiro, just have a look at the Lamentation over the dead Christ by Agostino De Fondutis, a work which collects 14 terracotta statues representing the scene of Christian piety: it will leave you speechless and seem imbued with a life of its own. Also worth of a visit is the romantic bell tower on the back, one of the oldest in Milan, which dates back to the 10th century.

Among the most beautiful churches in Milan there is another jewel of the Renaissance: the Church of Santa Maria delle Grazie declared World Heritage site by Unesco. It was commissioned by the Duke of Milan Francesco I Sforza who entrusted the work to the architect Guiniforte Solari in 1463. The man was entrusted to build a Dominican convent and a church in the place where once stood a small chapel dedicated to Santa Maria delle Grazie.

The cathedral was not only a religious place

The convent was completed by 1469 while the Church in 1490 after changes to the great cloister and apse ordered by Ludovico il Moro. This Cathedral was a witness to several historical events, it was not only a work of art and a religious place. 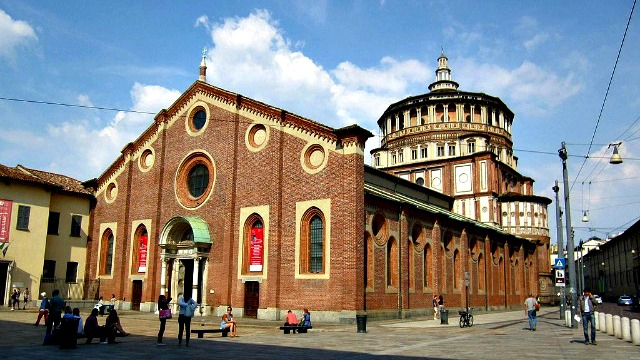 From 1553 to 1778 it became Court of the Inquisition and then barracks, while in 1943 it was bombed by the Anglo-Americans. Some important works were saved from destruction and later the Church was restored and returned to its former glory.

The fame of this building is linked to The last supper, fresco by Leonardo da Vinci conserved in the refectory. As you can imagine, this painting commemorates the christian episode where Jesus announced the treachery of one of his disciples. Even another important Italian artist, Donato Bramante contributed to the masterpiece, with the addition of the rostrum decorated in terracotta and marble.

The chapels of Santa Maria delle Grazie Church in Milan

Observe carefully the seven chapels on both sides of the Church: they contain works of inestimable value. The most important? St Catherine’s Chapel and the chapel of Santa Corona. The first houses sculptures by Antonello da Messina, while the latter is covered with frescoes of the 16th-century painter Gaudenzio Ferrari. A long time ago, it contained the work The crowning with thorns by Tiziano that is now in the Louvre. For hours and opening times, please have a look at the official website.

Read more: How to get from Malpensa Airport to Milan city center (and vice versa)

Best places for a Church in Milan

In this article I tried to describe you the most beautiful churches in Milan. Each one has a different story and house unique works of art in the world. But that’s not all. These sacred buildings will speak to your heart, moving it. You have already seen them, haven’t you? What do you think? Write your experience in the comments.

And, remember, if you want to visit the churches of Milan in complete relaxation, and enjoying all comforts hire our luxury car rental with driver. Just a simple click to book your private driver in Milan. You’ll see, in this way your trip will be actually an unforgettable experience.

Book your luxury car to discover the city of Milan 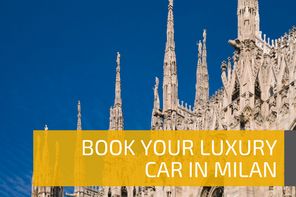